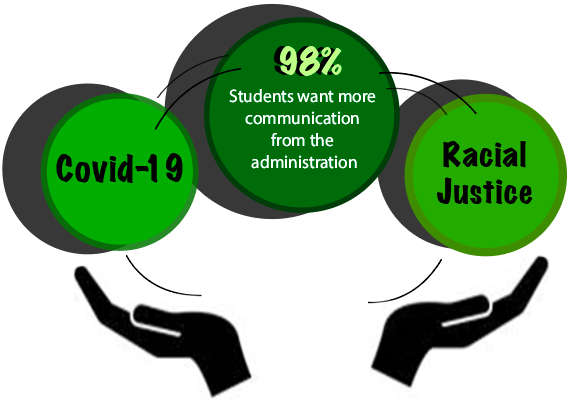 With the 2020 school year about to begin, Head of School Lee Hark is working to improve communication with students and faculty while addressing such national issues as the impact of the Covid-19 pandemic and demands for a more diverse, equitable and inclusive community.

The pandemic and protests have raised profound challenges for schools across America, and Greenhill is no exception. For Head of School, Lee Hark, these challenges come as he is trying to shape a new era of change and growth at Greenhill.

“We have to put every bit of available energy on building community and that’s where my energy and focus is going to be,” Hark said.

Leading Greenhill as head of school for the second year, like any new leader–especially one taking over for a popular, long-serving predecessor–Hark has faced pushback over various decisions.

The questioning of how things were handled range from changes to Homecoming to the school’s response to outside harassment experienced by some Greenhill Asian-American students as a result of the COVID-19 crisis.

With the rise of COVID-19, some Greenhill members of the East Asian Affinity Group expressed the view that Hark should have taken a stronger stand more quickly against the racially charged remarks in America about the Chinese origins of COVID-19.

In an earlier incident last fall, many students expressed displeasure at changes made to the Homecoming pep rally. In the previous pep rallies, there was a faculty dance-off between every division and a story read by the head of school to feature fall sports teams. These two pieces were taken out and replaced by a dance performed by a small faculty group and announcements made by head coaches about their sport.

The fallout from the Homecoming changes was still resonating with students months later. In an Evergreen survey sent to students in January, 76% of respondents said they weren’t told why the changes were made to the pep rally before it occurred. An overwhelming majority–96% said they would have wanted to hear about the changes from a school administrator instead of finding out at the pep rally.

The student reaction seemed to make an impression on Hark. He said in an interview that he would involve students in the pep rally planning for next year.

“No matter what decisions are coming down, most decisions seem random, because we don’t do enough talking with and to the students about them,” Hark said.

The Homecoming changes unleashed a flurry of rumors about other changes supposedly being contemplated by Hark.

Among them: Greenhill was going to impose an Upper School dress code, Senior Ditch Day was going to be abolished and exit interviews with seniors would no longer be conducted.

Hark has said he wasn’t sure how the rumors began.

Rather than end senior exit interviews, Hark said he has drawn on the interviews over the past two years to shape and improve Greenhill policies.

“I shared the feedback with the seniors, the board and the faculty,” Hark said. “Last year, one of the main areas of emphasis was around student mental health. Slowly, we are making those changes. That’s why student mental health is a big part of the strategic plan. I hope what that says is ‘we listened to you.’”

In the survey sent out in early January, 98% of the respondents said they wanted more communication from Greenhill administrators to the student body.

Hark said he has tried to make sure decisions are better explained.

“I have really tried hard to make people understand what has led to decisions and not just the decisions themselves,” Hark said.

The Homecoming changes were another topic of discussion in this year’s senior exit interviews, Hark said.

“In the senior exit interviews, the students have given me a lot of feedback about the desire to have a voice in decisions being made… and Homecoming is an example a lot of students point to,” Hark said. “I think they were right. I don’t think we’re going to reach a consensus, but at the very least, students could have been involved beforehand.”

We Have Seen This Before

Over the course of Greenhill’s history, there have been five heads of school:  Bernard Fulton; Phil Foote; Peter Briggs; Scott Griggs and Lee Hark.

Assistant Head of School Tom Perryman ’81, who coauthored the definitive Greenhill history, From Humble Beginnings, said this history is a rarity in the educational world.

“Greenhill is an absolute statistical freak, in that in 70 years we have had five heads of school,” Perryman said. “While the average tenure for heads of school in an independent school in this country is four years.”

As a former student and current faculty member and administrator at Greenhill, Perryman occupies a unique perspective on the school’s infrequent transitions of leadership. He also possesses rare insight into the leadership styles and personalities of all five heads of school.

“This transition has been a very smooth one, as transitions go [because] Mr. Hark has been an excellent listener and question-asker and has not started blowing things up… just for the heck of it,” Perryman said. “But I recognize from different perspectives from those who have not gone through this, it might not feel that way.”

When Hark stepped onto campus, every student in attendance had known only one head of school during their time at Greenhill: Scott Griggs, Perryman said.  No student at that time had ever experienced another transition between heads of school, Perryman said.

“That sustained leadership creates the sense that this is the way that it has always been and the way it always should be because it’s the way we know,” Perryman said. “Every time we have a change in leadership, it takes two, three, sometimes four years for the water to settle. When you get into year four and five, people are no longer talking about ‘the new guy.’”

Rusty Jaggers, a current member and former chair of Greenhill’s Board of Trustees as well as parent of two alumni,  said it was difficult for anyone to replace a popular head of school like Griggs.

Perryman was around to witness what he recalls as one of the more abrupt transitions, from Phil Foote to Peter Briggs.

“That change of leadership represented a dramatic change in personality and focus and that was really jarring for people,” Perryman said. “Those first couple of years, a lot of the people were reeling with the new head of school because Mr. Foote was this warm and gregarious leader and Briggs had a very different personality.”

Briggs was brought in to stabilize the school’s finances, Perryman said.

“You can’t do that without ruffling feathers and making people mad,” Perryman said. “Mr. Briggs was not interested in being popular; he was interested in doing his job.”

The early stages of the Hark era haven’t been particularly abnormal or surprising, but, rather, consistent with the trends in previous transitions, Perryman said.

Even the rumors that Hark was poised to implement a dress code have an antecedent, Perryman said, dating back to the tenure of Greenhill’s second head of school.

The bottom line, from Perryman’s expansive perspective, is that the Hark era has been consistent with previous transitions: some bumps in the road, but nothing that extraordinary—until Covid-19 and the racial justice protests, that is.

In a long career in education, this is Hark’s first opportunity to guide the overall direction of a school. He has embraced that challenge, even in the face of epochal challenges.

“It’s an extraordinary responsibility to do the job well,” Hark said. “Greenhill is just an exceptional community and I feel honored to have this job.”