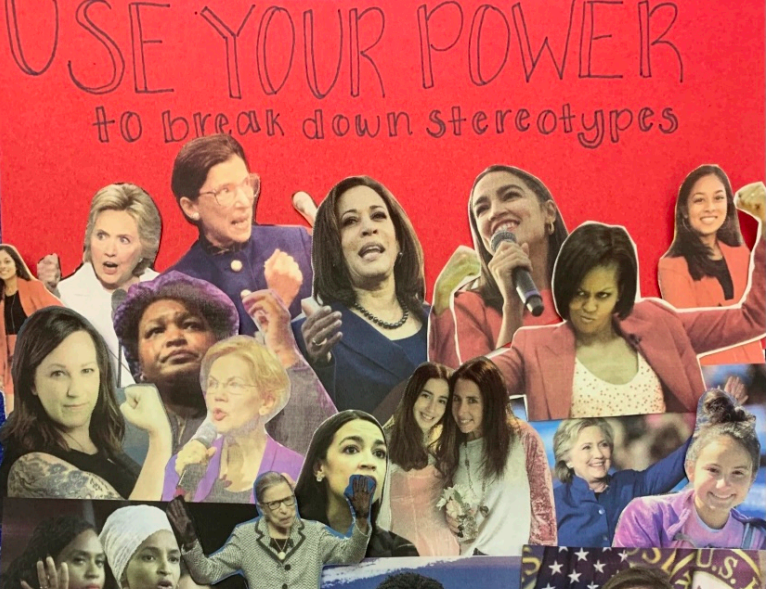 The Upper School Women’s Writings class created handcrafted magazines surrounding women’s rights and social pressures that were sent out in a mass email on Dec. 17.

Known as Zines, these handcrafted magazines are used to convey a message through a creative lens. They are typically filled with drawings, cut-outs of magazines and writing.

Zines rose to prominence around the early 1990s because of the Riot Grrrl movement, which was started by a punk feminist group who wanted to spread awareness about feminist issues such as sexual rights and abuse, said Abby Seeskin, the US Women’s Writings teacher. Supporters of the Riot Grrrl movement made Zines as a form of activism in order to reach a large audience.

In a normal year, the Zines would be mass printed and distributed all throughout the campus, but due to the restrictions of the pandemic, this was not feasible this year. To accommodate for on-campus and stay-at-home learners, Seeskin decided that a mass email would be the best way to distribute the Zines.

The purpose of each Zine was different based on the story each author wanted to tell, but all of them “expressed messages around gender they were passionate about”, Seeskin said. “You can really see the students’ individual personalities come out through the Zines.”

Injustices are common within society. For example, in the workplace, one in five women in the United States have been sexually harassed, and four in ten women have experienced gender discrimination, according to the Pew Research Center.  Zines bring awareness to injustices like this as well as issues such as women’s marriage rights, consent, sexual rights, gender discrimination and many more.

Junior Hallie Sternblitz and her group of four wrote about stereotypes among the variety of topics they covered.

“My goal was to show the people who don’t experience sexism the underlying sexist traditions we have and how each individual can play a role in breaking those down,” said Sternblitz. “They don’t realize the term ‘ladylike’ isn’t a compliment, or it isn’t yet, and that’s something we should reclaim.”

“Our Zine was spreading information about how social media can be used as a form of empowerment,” said Meng. “Currently, social media is a source for the objectification and belittlement of women, but I just wanted to emphasize that it can also empower women.”

Not only did these Zines have an impact on the audience, but it also changed the perspective of the people making them.

“Most of our topics in our Zine are based off personal experiences we’ve had and injustices we’ve seen,” said Sternblitz. “It’s inspired me to go out in the world to stop that, try to make a difference and try to educate people on how they can treat women better and how it’s more important to value human rights over tradition.”

For some students, reading last year’s Zines gave them exposure to feminism and encouraged them to explore it further.

“[Reading the Zines last year] is the whole reason I wanted to take this class in the first place,” said Meng.

Issues surrounding feminism are prevalent within society, and through these Zines, students are acknowledging the injustices in society and taking a step forward to educate more of the Greenhill community.

“Some of the Zines have real potential to be informative,” said Seeskin. “They have the ability to make other students feel like they are not alone because they are really affirming.”

“There’s a lot that each individual can do, but they maybe haven’t been educated about it,” Sternblitz said.