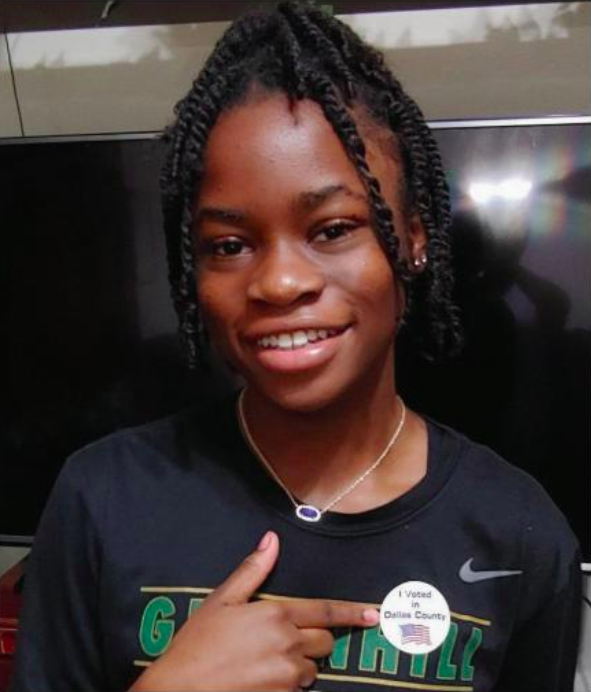 While the rest of the school enjoyed an extra hour of sleep on Nov. 3, seniors who had reached the age of 18 and hadn’t taken advantage of early voting were given time to cast their ballot before the start of classes.

For most, the 2020 election was an unprecedented one and took over many people’s lives for quite a few days. The issues of the Electoral College, potential flaws in mail-in ballots and polarization of communities became increasingly evident during this time, students said.

“[The election] was so complicated and so contentious, and I think expecting it to go smoothly was naïve,” senior Ava Markhovsky said.

Going into the election, each individual had various topics they were truly passionate about. For some Greenhill seniors, priority topics included climate change and social justice.

“I’d say climate change is important because it’s so impending and happening all around us,” said senior Olivia Worcester. “I think this stood out because it’s been so politicized.”

“I wouldn’t say [social justice] is like a policy thing,” Smith said. “I think it’s just a humanitarian thing…just understanding that everyone is equal.”

The election has impacted individuals both nationally and internationally, and it has been no different in the Greenhill community. Across the campus, students have had active discussions about the stakes.

“I think that it’s important to be in contact with people who have different views from you as long as it remains respectful,” Worcester said. “If you only take one side’s stance, you cannot come out of a discussion from someone of the opposite party effectively, which is what we need to start doing as a country.”

With the ability to vote comes an increased voice in society. For young voters especially, the policies made and candidates elected pose a direct impact of their daily lives.

“We are the people who are going to have to live with whatever decisions are going to be made, so we should have the most voice in it,” Markhovsky said. “For a lot of people voting, it’s not going to be their problem, but it’s absolutely going to be [our] problem.”

“It’s important because you have this magnificent voice that you need people to hear, and that’s what we do in voting,” Worcester said. “It’s a civic duty for a reason.”

Realizing the unique responsibility young voters have, many Upper School seniors who were 18 went out to vote.

“I would definitely say it was a positive experience,” Smith said. “I went on Election Day and I got there at 7, which is when polls open, and I would say I was out by 7:10.”

For Smith, casting her first presidential election ballot was an opportunity to play a role in reshaping America.

“There’s a lot of high school kids who don’t vote, and I don’t think they realize how important it is,” Smith said. “If you want change to happen, you actually have to do something. You can’t just hope and talk about it.”