The Political Power of Social Media 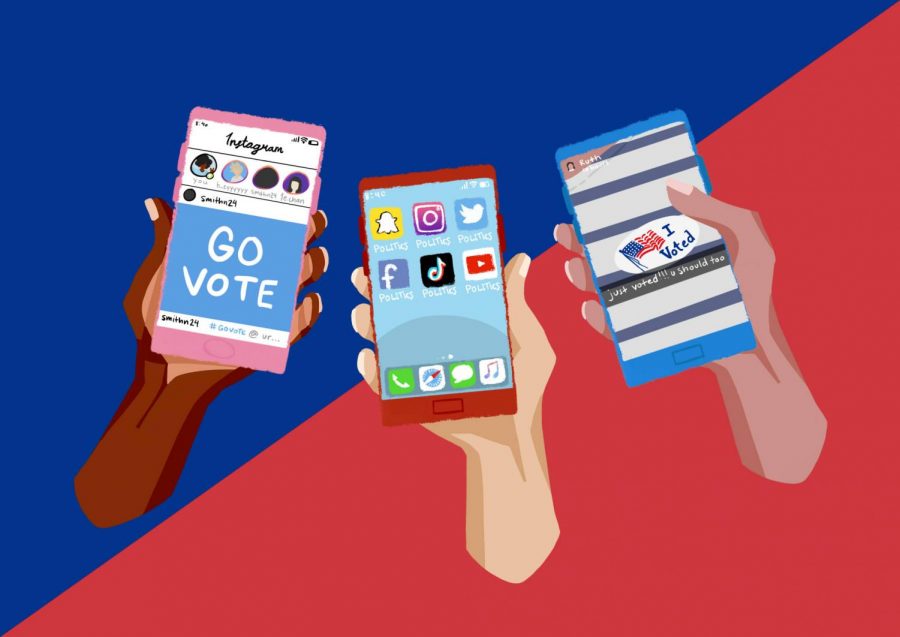 In between classes, sophomore Ian Bock often hops on his phone and scrolls through social media. Sometimes, he’ll share content on the social media platform Instagram.

Typically, these posts are about the election. Instagram facilitates sharing what’s going on in the form of posts and stories, making it ideal for sharing opinions on current events.

Bock shares these posts for whoever wants to listen. In a mostly liberal-leaning community, what he values most is conversation, Bock said.

“I post so I get it out there, because I want the information out there,” Bock said. “I don’t care who it reaches, so long as it reaches some people.”

From the pandemic to the presidential election, 2020 has been a memorable year for news.  And amplifying the swirl of information around these historic events is social media. . Its interface makes it ideal to absorb information about politics in bite-sized chunks.  Sharing something is now only a tap away.

For senior Ava Markhovsky, it’s a way to express herself amid the current events.

“Right now, I think there’s a real sense of loss of control, and it feels like this is something that we can control,” Markhovsky said.

Since most Greenhill students aren’t yet eligible to vote, apps like Instagram are ways that students can stay politically active.

“Not having the ability to vote helps to push us to go toward those other avenues,” junior Ashton Higgins said. “This awareness and this engagement carries over in the next couple of years when we are able to vote.”

Youthful Obsession
According to the Pew Research Center, 97% of U.S. teens ages 13 to 17 used at least one of the seven main social media platforms in 2018.

For some, Instagram acts as a glass through which one can view particular current events,, junior Hallie Sternblitz said.

“I’ll get the facts from CNN and then I’ll go to Instagram and see five different people posted different ideas about that, and then I figure out which one I most align with,” Sternblitz said.

Upper School history teacher Scott Cotton said he follows politically active public figures and politicians to find out what other educated individuals’ opinions are. Although he does not post on Twitter, “[it’s] a great way to find out what interesting, smart people are reading and thinking.”

“It’s important to post something that you think will be good for you,” Gajderowicz said. “Even within the circles I do occupy, I think there is still room to sharpen your perspective.”

Social Media in the Classroom
As social media continues to influence political activism, a new question has arisen: Should its role in politics be discussed in the classroom?

To Cotton, the answer is yes. His Advanced Placement (AP) U.S. Government class has explored various readings, one of which is a work of political science that navigates the role of media in politics.  He believes social media should be foregrounded in class, since it impacts the students he teaches.

“We have a chapter in the [text]book on media [but] we should do more of that, especially as the election is a few weeks away,” Cotton said.

Director of Marketing and Communications Kerry Shea believes social media has played a pivotal role in facilitating communications within the Greenhill community, especially during the pandemic.

“During COVID-19, social media has been particularly important in bringing our community together, since we have not been able to come together physically in the ways that we have traditionally,” Shea said.

To her, giving students the tools to be courteous digital citizens is a priority.

“The school intentionally teaches students how to engage in civil discourse, or sharing opinions and thoughts in respectful ways,” Shea said.

The Pitfalls of Social Media
With its high activity among Greenhill’s student body, some members of the community are concerned as to whether social media is the best outlet to express political beliefs, since conversations are more stilted on these digital platforms.

Gajderowicz is one of those who is concerned. Since the algorithms are designed to pull up posts similar to what is being consumed, he cautioned users to be diligent.

“If you create your own echo chamber, Facebook will be more than happy to keep that up for you,” Gajderowicz said.

Another concern is that of fake news.  Although many feel confident in identifying it, seeing and accidentally sharing exaggerated comments or misinformation on their feed is common.

Social media, as Markhovsky describes it, can be the world’s biggest game of telephone if one is not careful about fact-checking  content.

“If you can’t argue the thing that you posted, then you shouldn’t post it at all,” Markhovsky said.

For Sternblitz, though users may not be spreading misinformation deliberately, the condensed content in posts can unintentionally relay divisive messages.

“[On] Instagram, you’re not going to post a whole paragraph because who’s going to read that?” Sternblitz said.  “You’re going to post a few sentences, and a lot of times quotes can be taken out of context.”

“I do enjoy having Instagram to have that space to debate people, but there are ways to make it so one-sided for yourself that it eliminates all the good that it does,” Bock said. “For me, I prefer to do it face-to-face.”

Social Media’s Polarization
Bock sees social media as ultimately more polarizing than unifying. Since a partisan space can be created with no input from the other side, it means conversation can become especially limited, Bock said.

Cotton says that social media can create the illusion that Americans have more radical viewpoints than they actually do.

“Twitter is distorting all of our senses,” Cotton said. “[Social media] is a polarizer, or it attracts more people who are polarized.”

Head of School Lee Hark  describes social media as another challenge for teenagers in a complicated world.

“Using social media appropriately is challenging to do, especially for young people with access to powerful channels of self-expression but without many positive exemplars on which to pattern their own use,” Hark said.

Hark also finds the inherently divisive nature of social media troubling and instead encourages the Greenhill community to be empathetic in political discussions.

“[Social media] is often intended to divide us rather than bring us together,” Hark said.  “It’s important to remember that we need to be active listeners, to seek first to understand before being understood, and to enter into dialogue with compassion and empathy for those who have different views.”

The lack of distinction between performative action and genuine desire to promote positive change also contributes to the setbacks of social media, Higgins said.

“There needs to be an awareness of what being posted on social media is going to be helpful and what is just performative,” Higgins said.

Social media, despite some difficulties, is worth utilizing, but it’s not a definitive source, Markhovsky said.

“Social media is not the answer, it is a part of the answer,” Markhovsky said. “Take everything and put it together and figure out what you think. Because at the end of the day, if you know what you think, then you will fight much harder than someone being told what to think.”