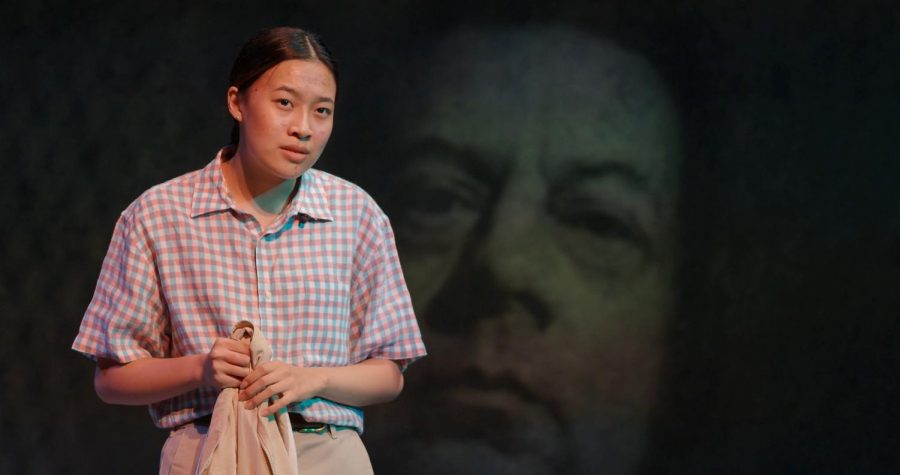 SophomoreMegan Liu takes the stage for the Exonerated

Accused of shooting her husband five consecutive times, a Black woman was wrongfully sentenced to life in prison. At the time of the murder, she had been sound asleep with her two daughters. The police, unable to find any other suspects, accused her, assuming that she had been jealous of his affairs with two women.

The story of Elicia Hughes, along with eight other criminal justice system exonerees, was shared digitally with the Greenhill community Dec. 3-5 in the original fall production, “Race, Fire, Children, and Wives.”

For the first time, students researched and wrote their own script, because they were unable to obtain digital rights for the original play, “The Exonerated.”

Since COVID-19 prevented Greenhill theater students from taking their normal approach to productions, filming scenes was an additional challenge.

“We couldn’t be in a room without a mask on, no closer than six feet apart, and we had to figure out how to put a production on,” Said junior Ilanna Feldman.

Another challenge was the lack of a live audience, which impacted many students’ abilities to perform.

“Without an audience it [was] a lot easier, and the camera [took] the edge off,” junior Kuran Patel said, “You want to give the best performance you can give.”

For others, the lack of a live audience was a difficulty.

“As live actors, [we] had to totally change our acting styles in order to be able to perform something that is filmed,” junior Kayla Rutner said. “The camera picks up everything, you definitely have to tone it down.”

As the Greenhill students and teachers who contributed to the production reflected back on the past few months, they expressed their satisfaction at watching all the individual stories come together.

“I think this for sure was a success, especially since this is something we have never done before,” Rutner said. “For a bunch of amateurs I think we did incredible. Everything just came together perfectly.”

“It’s really important that we all recognize that we can push through,” said Feldman. “Life’s going to throw challenges at us and no matter what is thrown at us, we’ve proven that we can do anything.”

The play was also recognized by KERA, the Dallas-area public broadcasting affiliate.. The KERA coverage focused on the work of the students in researching and filming the play as well as  the issues showcased by the production.

Since the production was aired as a digital recording rather than a live performance, it’s likely to reach a larger audience over a longer period of time

“The fact that it’s recorded and the reach it will continue to have—I don’t think I can overstate how significant that is,” said Director of Equity and Inclusion Marcus Ingram.

The months of hard work by the theater students have come to a successful end,  but the play’s powerful message remains:

“Stand up for yourself,” junior Blake Martin said at one point during his on-stage performance. “Don’t let someone tell you [that] you did something, when we know damn well you didn’t do it.”