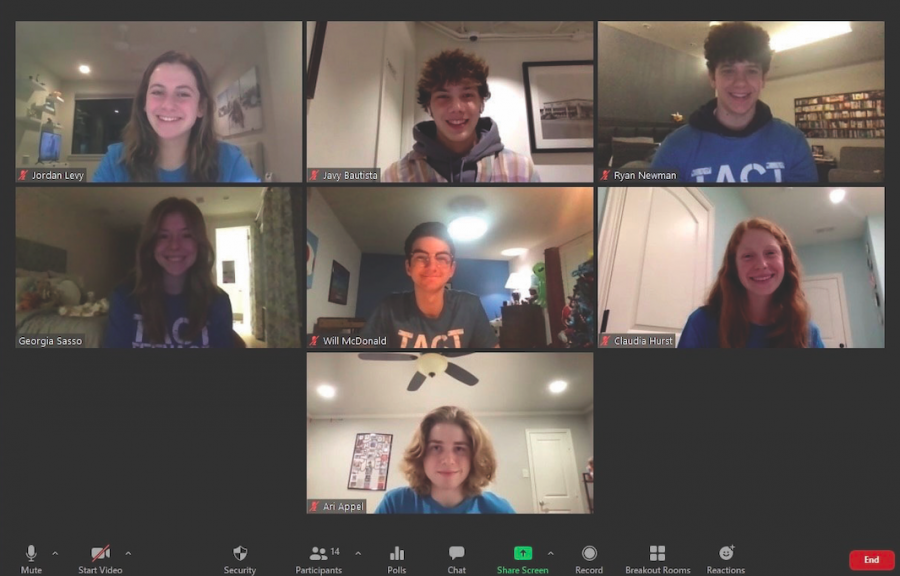 The TACT program focuses on educating teens in the Dallas area on topics such as sex education, mental health, and substance abuse through short skits. Their performances aim to spread important information and facilitate conversations around serious topics that affect many teens.

The program is unique to the Dallas Area, and has 43 members, with 14 of them being team leaders, or TLs. Members spend a lot of time preparing and presenting their skits, but also focus on educating themselves through the group by listening to outside speakers and creating presentations to share with each other.

Senior Ryan Newman, a TL in the TACT program, believes that the group’s work in educating others is necessary because many teen issues aren’t discussed candidly. A prime example would be sex education, where abstinence is often the focus instead of teaching teenagers how to practice safe sex.

“Spreading factual information of reproductive health and sex education helps young adults understand the meaning and importance of birth control, shows teens how to have productive and necessary conversations about subjects they may consider ‘taboo’ and prevent unwanted or accidental pregnancies for all of our audience members,” Newman said.

Senior Javy Bautista, another TL, agrees that TACT has given him the perfect opportunity to turn his interest in social advocacy into action.

“It just gave me an opportunity to be with other people who felt that same passion for that,” Bautista said.

Senior Josh Flowers is also very passionate about educating others and spreading awareness about certain issues. As another TL in TACT, he gives presentations on some of the social justice issues he’s interested in and helps train new members over the summer.

After any skit about a specific topic, the TLs in TACT encourage the audience to ask questions and start a discussion. Watching the skits is supposed to help them understand the topic, allowing them to make more responsible decisions in their own lives.

“I really loved becoming a TL because talking with the audience is such an amazing experience,” Flowers said. “I think it’s the highlight of my time in TACT, just getting to meet incredible individuals and hear so many powerful stories, and see first-hand how important the work that we’re doing is.”

TACT aims to make sure that its audiences – which include schools, churches, juvenile detention centers, and foster care homes – feel heard with TACT members to support them.

“There’s been times that people in the audience will come up to TACT members after a performance and just say, ‘Hey, I’ve been through x, y, z, and that’s why your performance today really resonated with me’ or ‘Hey, I’ve been dealing with this at home, and your performance is the reason that I’m going to reach out to someone and ask for help’,” Flowers said. “Those situations are really just the most powerful because it means so much to see that you can make a change in an individual’s life just through performing a skit and having a discussion.”

TACT coordinator Linda Fyffe explained that since having to move to online Zoom performances, the group has begun expanding their online presence.

Other than performing, TACT also makes content for social media platforms, something Fyffe believes is especially important right now due to the pandemic. For example, they have begun creating videos and sharing content on TikTok.

Another way TACT members stay current is through educating each other on topics that are important to them during their weekly meetings. Meetings often include presentations from TLs and discussions that involve all members.

“A lot of us have gotten our thoughts out through those,” Bautista said. “That’s one of the best things about TACT: having people to talk to.”

Outside of sharing information among themselves, members also listen to speakers with experience in advocacy to better understand the various topics they educate on.

“The kids get training from experts in the field,” Fyffe said. “This weekend we’re hearing from a doctor on eating disorders, and over the summer we hear from speakers from places like the Dallas Rape Crisis Center. We’ve had a trans panel come and speak to the team. It’s really important that they learn about these teen issues because that’s what they’re educating on.”

TACT offers a way for teens to make an impact in their community and spread awareness on issues that matter to them.

“Because of the way that so many people in our city don’t have access to the proper resources and knowledge to be safe people, I just really hope that I can get that information to those vulnerable populations to keep everyone safe, happy, and healthy,” Flowers said.

According to Fyffe, Greenhill students have been an important part of TACT and in helping to push the group forward.

“The attitude that they have about it, they’re just passionate,” Fyffe said. “They want people to make healthy and responsible decisions.”

Members believe that joining the program has not only benefited the lives of others in the Dallas community, but also their own.

“Joining TACT was the best decision of my life,” Flowers said. “Nothing in my life has really fulfilled me or gave me meaning or purpose like TACT has.”