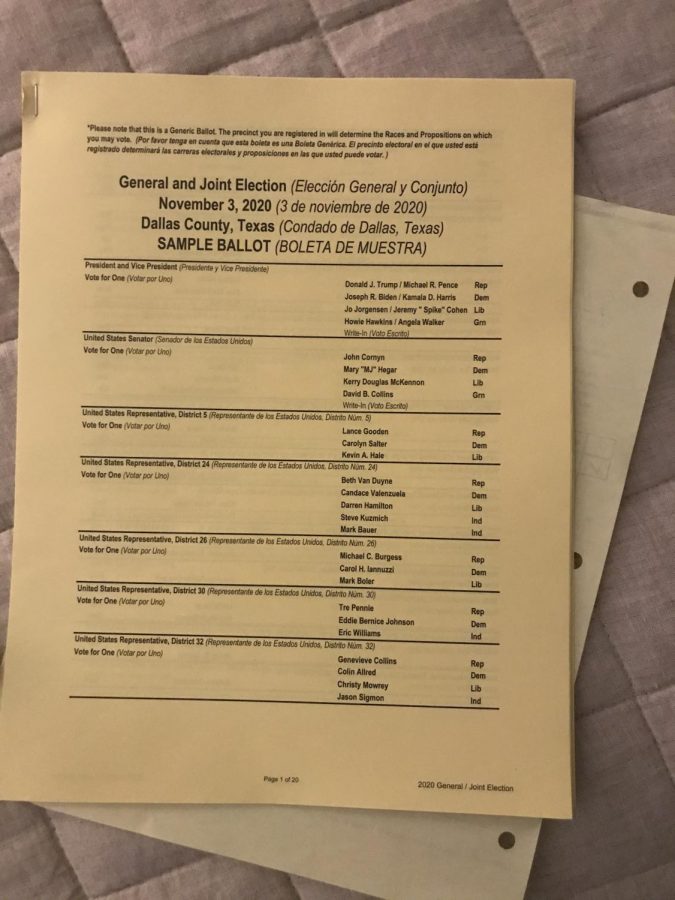 Sample ballot given to Jonah Yaffe, a junior who volunteered as a poll worker.

As Greenhill students learn about the outcome of the election, discussion has been sparked across campus about the democratic process in America. Seniors Dulany Bloom and Josh Flowers experienced this process first-hand as poll watchers.

In October, Bloom and Flowers were interviewed by The Evergreen about their involvement in the student poll workers program in the Dallas area. The students said their interest in the election and the democratic process were driving factors in why they volunteered.

Around the Dallas area and the country, students like Bloom and Flowers filled election-day positions previously held by senior citizens who decided not to volunteer as poll workers this year because of the COVID-19 pandemic.

In follow-up interviews, Flowers and Bloom recounted their experience working at polling places on Election Day.

“Working the polls during the 2020 election is an experience I will never forget and will take with me for the rest of my life,” Flowers said.

While Bloom and Flowers did not quite know what to expect going into their work on Election Day, the tasks that they were given turned out to be simpler than they had anticipated. The students worked from 6 a.m. to 7 p.m. the day of the election doing a variety of jobs aimed at assisting voters as they sought to cast their ballots.

This included checking in voters through the electronic poll book, where registered voters’ government-issued IDs were scanned and found in the database. Once a voter was registered at the proper location, the election clerk would then print out their ballot and direct them to a booth, the student volunteers said.

“I was a little nervous going in that I might mess something up, or not know how to do something,” Flowers said. “But everyone I was working with was really helpful and supportive.”

Bloom and Flowers both saw smaller crowds in the afternoon, whereas the mornings were much busier. They attributed the smaller fluctuation to early and mail-in voting, which was more prominent in the 2020 election cycle than previous years.

In the times where the voters coming to receive their ballots were few and far between, Flowers joked that he wished he had brought something to keep him entertained.

“It was a lot slower of a process than I thought it would be,” Flowers said. “It was a lot of me just waiting in between voters.”

While Election Day might not have been as busy as Bloom and Flowers expected, they still found the online training they had done beforehand to have been very helpful in preparing them for their jobs.

“I think not having the training would have been feasible, but I think it would have been way more confusing, just because there are so many different circumstances and situations that we learned about in the training that weren’t necessarily used on Election Day,” Flowers said. “But just having that knowledge, I say, was really helpful.”

The students also talked about efforts made by their precincts to keep the poll workers as well as the voters safe from COVID-19. Election clerks were required to wear masks at all times, and the workers and voters were separated by plexiglass shields during their interactions. There were also multiple sanitation stations at each location, and all voting machines were wiped down before and after each use, the students said.

However, voters who were not wearing masks could not be turned away. Due to the fact that they still had to be around those individuals, poll workers were further worried of possible contraction of COVID-19 while conducting their civil duties. Both Bloom and Flowers said they felt safe during most of their time at the polls, and they don’t think those few individuals not wearing masks spread the virus.

All the same, Bloom and Flowers believe that the work they did on Election Day ultimately gave them better insight into the democratic process. Looking back on her experience, Bloom says she wishes that she had been able to do poll work before actually voting.

“I saw it from such a different angle, and I understood it so much better afterwards,” Bloom said.

Overall, the students’ experiences as poll workers even allowed them to theorize on how the democratic process could be improved.

“The whole process of registering to vote already limits the people that can vote,” Bloom said. “I would even argue that that’s a form of voter suppression, because then they can limit certain groups [from] registering.”

Flowers also learned that while considering the length of time required to count early and mail-in ballots, some change in the state legislature could be necessary to increase the efficiency of the democratic process. Flowers recommends that states be able to open and count mail in votes before the election to enable polling locations to get ahead on their workload before Election Day.

“I think that as a poll worker, I had a little more insight into just what the process looked like on election day,” said Flowers. “I think moving forward, hopefully we can see some kind of reform when it comes to early ballots and mail-in ballots.”

Flowers and Bloom also talked of the impact their experiences have had on them, both as part of the democratic system as well as the results of the election.

“I know it wasn’t a big surprise that Dallas was blue, but that, to me, was just really exciting,” Bloom said. “Those were the people that I checked in, and my own vote goes towards that.”

Flowers shared that view and said he was glad to see his impact on the election this year.

“Working the polls really made me feel like I was contributing to the election, even if it was in a small way,” Flowers said. “Being a part of helping in that just felt really rewarding.”

Both students said their final message to fellow students and voters remained the same as it did before the election, with an emphasis on the importance of voting, even in a time as strange and challenging as 2020.