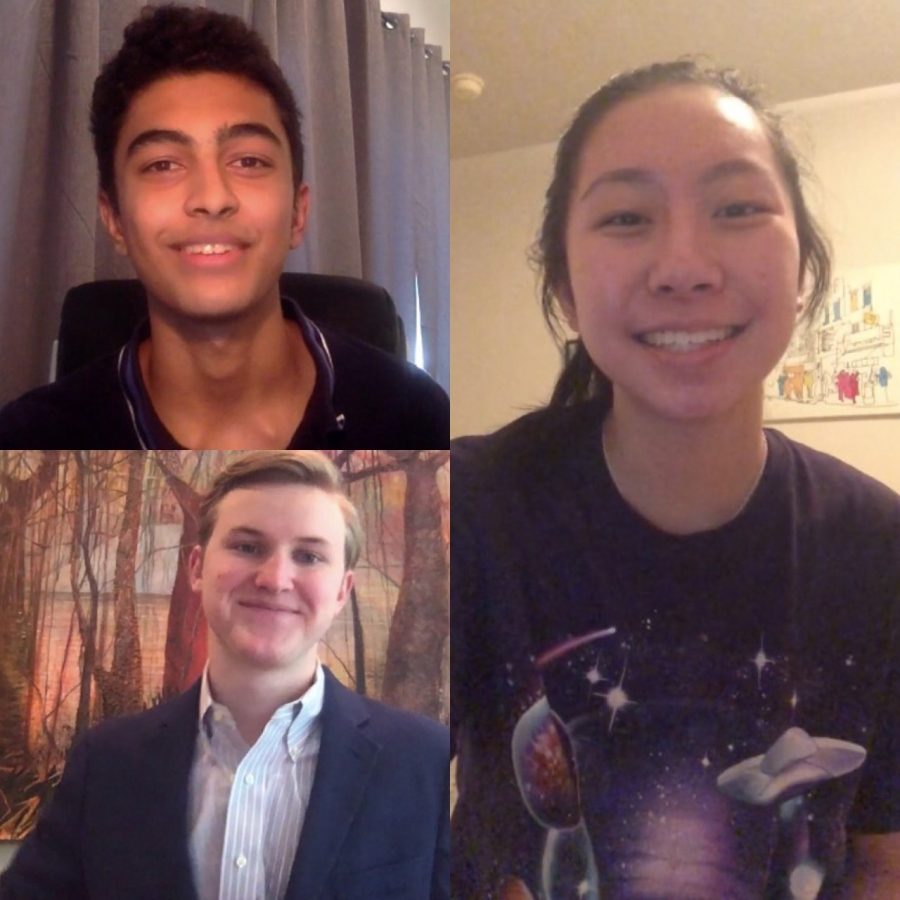 The three candidates who won the elections for Student Council on their video speeches.

After virtual speeches, three days of voting and a run-off election, three students have been elected to lead Student Council for the 2020-2021 school year.

Grimsley will assume his responsibilities on the conclusion of his current duties as  junior Class president.

“I wanted to run for Student Council because it is important to give back to my community, which has given me so much,” Grimsley said. “Winning the election means the world to me. It will be a wonderful way to cap off my 15 years at this school. I am grateful that so many of my Upper School peers share the same vision that I do.”

Students who wished to run for a Student Council office this year recorded a video of themselves rather than delivering traditional speeches before Upper School students in Rose Hall. The changes were necessitated by the Covid-19 pandemic, which has resulted in Greenhill students attending online classes only since March to follow government quarantine recommendations.

In their campaign videos, each candidate spoke about why they were good candidates and what they wish to achieve in the coming school year should they be elected. Students gathered in their online advisory groups to watch the candidate speeches before voting.

Three juniors ran for the position of Student Council president: Max Chow, Jessica Herlitz and Grimsley. In order to be elected, a candidate needed to earn more than half of the votes. Herlitz and Grimsley advanced to a runoff election, with Grimsley ultimately prevailing.

Grimsley said he hopes to preserve many of the Homecoming traditions that Greenhill has practiced for years. He also aims to revive Color Wars between graduating classes and increase the number of activities during the school year, he said.

Three students also contested the race for Student Council vice president: juniors Anagha Gouru and Khan and sophomore Ashton Higgins. Khan avoided a runoff by winning more than half the votes in the first round of balloting.

Khan said he hopes to use his position to build a stronger relationship between students and the administration, with the aim of increasing student input in decisions.

“I ran for vice president because student events are critical to our community growing and becoming more tightly knit,” Khan said. “I think it’s important for the students to have a voice when it comes to decision making at Greenhill.”

Chien ran unopposed for the position of Student Council secretary. She has been in Student Council throughout her her years in Upper School, holding various leadership positions for her grade level.

“I want to make our voices heard,” Chien said. “I hope to be able to push for what the student body wants to the administration. It has also been really fun being a part of Student Council these past few years and being part of an organization where everyone is passionate about helping out our community.”