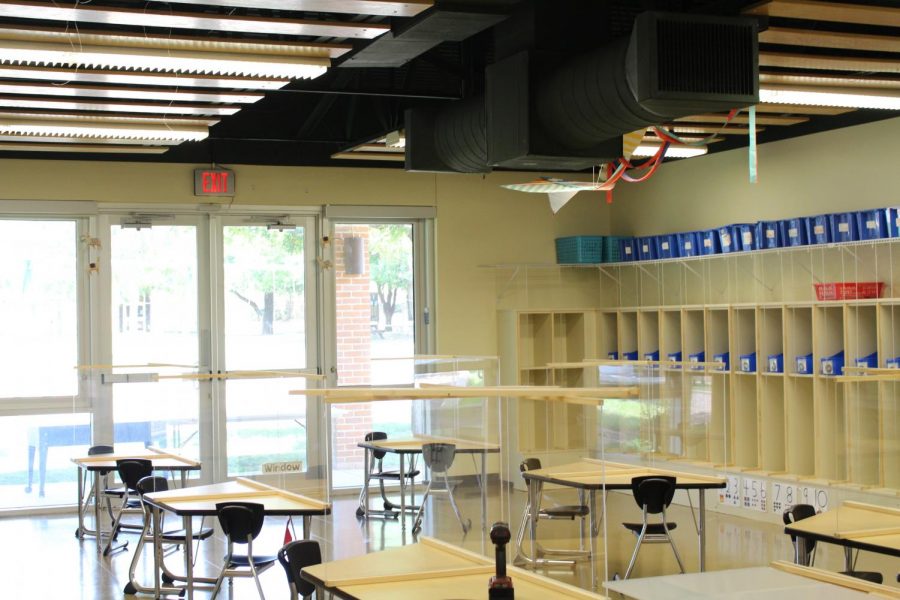 A classroom in the preschool has plexiglass barriers on each desk.

The United States leads the world in Covid-19 cases and deaths, and the pandemic caused by a fast-spreading coronavirus has disrupted schools and universities around the globe.

With cases on the rise in much of the United States, schools have to contend with difficult questions over whether to conduct classes in person or remotely for the 2020-2021 school year. Greenhill School will start the year with remote learning on Aug. 25, but plans to resume in-person classes after the Labor Day holiday.

Greenhill has assured parents that they’re prepared for the resumption of in-person classes under strict social-distancing guidelines.

The Greenhill website has outlined plans to start the school year in person. Measures aimed at keeping community members safe include wearing masks, restricting hallway traffic to one direction only and social-distancing of at least six feet.

The Evergreen recently toured campus with Head of School Lee Hark and Chief Operating/Chief Financial Officer Kendra Grace to document the changed physical setting. Here is what we saw:

In the younger grades, there is a greater emphasis on staying in small groups to make contact tracing easier, as well as a focus on how to follow the new policies.

“There is just going to be a lot of education,” Grace said. “I don’t think any of us are under the illusion that a four year old is going to not do that [tug at their mask], but we are hopeful they are learning at home now and when they come here [school] there will be a lot of time spent making sure they follow the policies.”

Another measure to contain any potential spread is restricting students to small cohorts. This is primarily for preschool, first and second grade. These cohorts would allow students to stay in small groups to minimize spread to other groups in their grades.

Additionally, Preschool and Lower School students will eat at their desks as opposed to the cafeteria to give them room to spread out.

The food is even being prepared in the Preschool Building kitchen as opposed to the cafeteria.

Since students sit at the same table in the Preschool, plexiglass has been added to the desks to minimize any spread from student to student in the classrooms.

Furniture has been removed from normal gathering areas, but relocated around campus to spread out study areas. One such place is the locker rooms. The lockers themselves won’t be in use, but tables are being added in those areas.

The designated areas are a way to contact trace when necessary.

Outside of gathering areas, there are other precautions within the classrooms themselves. Desks in classrooms are spaced out six feet apart and will be cleaned between classes, Grace said.

“There will likely be assigned seating in the Upper School,” Grace said.

Since many classrooms may not be able to accommodate the normal class sizes in a distanced manner, they have considered investing in outdoor furniture and classrooms.

We have authorized the purchase of a new Wi-Fi that will reach farther across campus, Grace said.

“We may not have all the outdoor furniture ready to go, but it’s also 100 degrees,” Grace said. “So I’m not worried if the furniture isn’t in place till October, because my guess is that’s the first time people are going to want to be outside anyways.”

During the school day, passing time between classes has been increased to 15 minutes. In a further attempt to control the flow of traffic and minimize face- to- face contact, doors of each building have been designated “in” or “out” doors.

Unlike the lower grades, Upper School would likely eat in the cafeteria, Grace said, but the Middle School is still being worked out.

“It will likely feel more restrictive for the time being, given the freedom in the Upper School,” Hark said. “We are having to put rules and policies in place to keep kids from intermingling in the way they typically do.”

Most of the front offices have plexiglass barriers, but for the time being no outside visitors will be allowed on campus.

“Our facilities team is making all this,” Grace said. “They’re saving us a fortune. The people who are putting time and work this summer are truly amazing.”

The plexiglass was ordered and the facilities team made all the dividers and sized them to fit in each spot.

With many classrooms pulling desks far apart, there isn’t much space for the normal bookshelves and tables that are commonly found in a classroom.

Many of these things have been moved to storage pods in the parking lot or rooms not in use to make space for socially distanced classes.

Cleanliness While on Campus

Water fountains have been replaced with water bottle faucets and hand sanitizer stations can be found throughout the school.

All these measures are attempts to minimize the possible spread of Covid-19 between people and helping them stay clean during the school day.

Another potential problem area are bathrooms, so there will be strict limits on the number of people who can enter a bathroom at any given time, Grace said.

Back to School
While school will remain online until Sept. 9, Greenhill has is finalizing plans for how the resume of in-person classes will get underway. Among other things, signs will be put in place to specify “in” or “out” doors or and hallway traffic patterns.