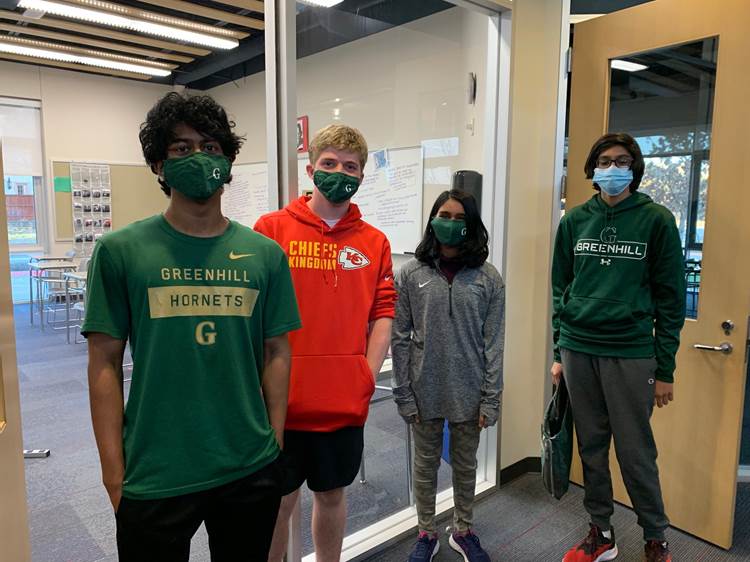 The final Quiz Bowl round came down to a single question. Greenhill’s A team competed for the Texas Quiz Bowl Alliance (TQBA) state championship against St. Marks and claimed victory when captain, Josh Rubel answered the final question correctly.

The final question of the round was about Israeli politics. Rubel was in luck because his mom had made him attend a lecture about that very subject prior to the competition.

“When I heard the question, I thought I knew the answer,” Rubel said. “So I took a shot and got it right.”
The Ins and Outs of Quiz Bowl
The tournament, similar to others this year, was conducted via Zoom. Each round included the four players from each team, their coach, a moderator to ask questions and a scorekeeper. To answer a question, a competitor types “buzz” into the meeting chat. For Greenhill’s team, each competitor was in a separate room to follow safety guidelines.

To win, one team needs to have more points than the other after the end of the match. When each tossup question is read, competitors are able to interrupt the reading when they know the answer. These are answered individually, but doing so allows the competitor’s team to answer three bonus questions relating to the original problem.

Questions typically range from topics such as math, history, sports and science. Usually, each team will have their players specialize in a few topics, rather than everyone knowing a little bit of everything.

In Greenhill’s team, for example, Rubel focuses on history, geography and sports.

Even with the specialized roles of each team member, anyone can answer a question.

“The person that best knows an answer buzzes in as soon as they can,” Siva said. “Many questions become buzzer races with literally a fraction of a second separating the winner and the loser. So, for tossups, it’s truly a free for all.”
The TQBA State Championship
The state tournament had 12 teams competing in it, and only the A team competed for Greenhill. Rubel and the other three players started off their morning with an early victory against Westside High School. Greenhill’s team continued their victorious steak for the 11 subsequent games.

Greenhill’s successful performance put them in the top seed of the bracket as an undefeated team. This placement gave them an advantage in the championship match, meaning they had to win at least one of the two matches to win the championship.

In the first round of the championship match, Greenhill lost to St. Marks with a close score of 370-400.

“We only gave positive encouragement to each other,” Rubel said about the time between the first and second championship matches.

The two teams were tied going into the final question. The final tossup, regarding Israeli government and politics, was answered accurately by Rubel, giving Greenhill the win with a 410-400 score.

“One thing I’ll always remember about that day is that we were all excited after the championship victory,” Rubel said. “Although we were in separate rooms during the competition at Greenhill, we were able to celebrate after.”