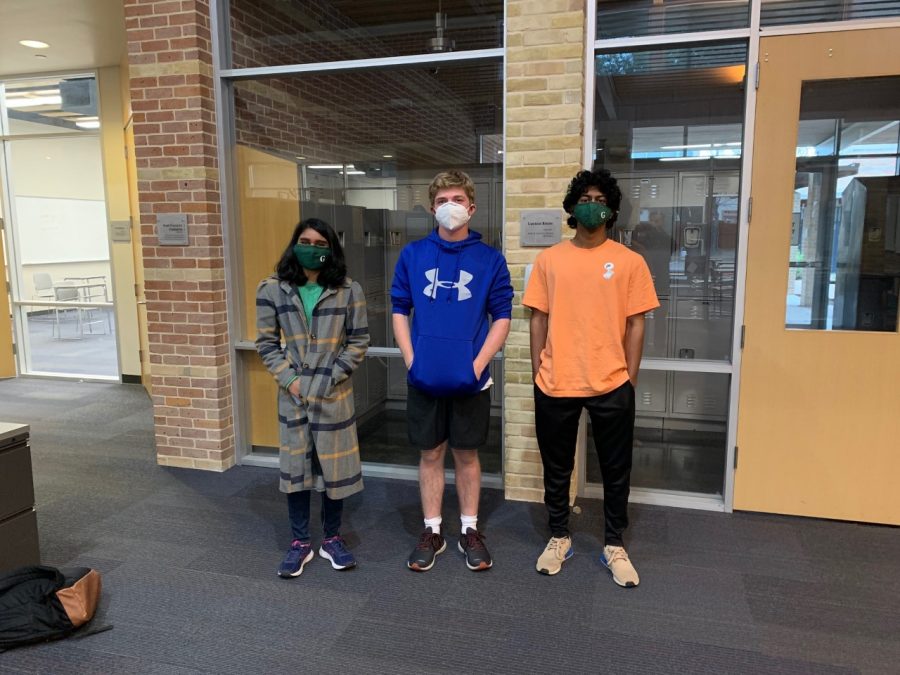 It was the evening of Nov. 21. Greenhill’s A Team and St. Marks’ A Team were the only ones left in the Texas Quiz Bowl Alliance (TQBA) Houston Holiday Hoedown XII (HoHoHo). The Quiz Bowl game had come down to the final question of the final round. Although both teams had already qualified for the 2021 High School National Championship Tournament, victory was at stake.

Greenhill buzzed first, then answered, then won. Greenhill’s A Team was the only undefeated team left in the competition, beating St. Marks by only one question.

Greenhill’s Quiz Bowl teams have been competing roughly once a month since September, with the high school teams consistently placing in the top five.

But Quiz Bowl, like other competitions, has been affected by the COVID-19 pandemic. Now, tournaments are completely virtual. No two students on the same team are allowed in a room together, and players “buzz in” by typing in the Zoom chat.

The HoHoHo was sponsored from Katy, Texas, but as a benefit of the completely virtual tournament, teams who would only meet once a year at nationals now have the opportunity to compete against each other more often. Teams from states far and wide such as Michigan and Ohio were able to attend. Even one team from Singapore competed.

The virtual platform for Quiz Bowl tournaments, however, has not deterred players.

Although Najm had never been a part of the Quiz Bowl world before this year, he decided to try something new.

“I think I got really lucky with Quiz Bowl because of the phenomenal students involved,” Najm said.

The Upper School Quiz Bowl Team is comprised of about six to eight students who participate on a regular basis. For competitions, students are divided into groups of four, called the A Team, B Team, and so on. Greenhill’s Upper School usually sends one team to each competition.

Students are selected to compete based on their availability. Competitions are held on Saturdays and start at 8:00am. Final rounds are often held after 5:00pm.

Greenhill’s Middle School Quiz Bowl teams have also been very successful. In the Middle School division, which is comprised of seventh- and eighth-graders, the A, B and C teams respectively scored first, second and fifth place, qualifying for Nationals in the TQBA Big Tex Bonanza. In the Elementary division, made up of fifth and sixth-graders, Greenhill’s F and G teams made it to the semifinals.

In the middle school division, with 27 teams competing, Greenhill’s B team placed third, qualifying them for nationals.

Quiz Bowl, a sport of trivia, has two types of questions. The first kind, called toss-ups, is given for anyone to answer. If a player knows the answer, they will say “buzz” and get called on.

The second type is called a bonus. When a toss-up is answered correctly, three bonus questions related to the toss-up, are given to the team who answered correctly. Unlike in toss-ups, team members can collaborate to find answers.

The questions asked are chosen from a range of topics such as history, literature, math and science.

According to Middle School Quiz Bowl Coach and History teacher James Herman, the biggest differences between Middle and High School Quiz Bowl are the difficulty of the questions and the time it takes students to answer.

Herman, who is also new to Greenhill this year, has history with Quiz Bowl. When he was a lower school student in Georgia, Herman’s school had a Quiz Bowl program exclusively for fifth-graders.

“I looked forward to it every single year,” Herman said.

He joined the team in fifth grade. That year, they ended up winning the county championship.

Then in 2014, after teaching at Parish Episcopal School for a year, Herman got reintroduced to the activity, this time as a coach. Since then, he has been coaching Quiz Bowl for six years.

Another long-time Quiz Bowl participant, junior Joshua Rubel, has been involved in the competition since he was in middle school.

“I really just enjoy the whole team aspect of it,” Rubel said.

Rubel has now been doing Quiz Bowl for four years. In addition to playing tennis, he is the current captain of Greenhill’s Upper School A Team.

“Anyone can do Quiz Bowl,” he said. “It really depends on what you want to get out of it.”