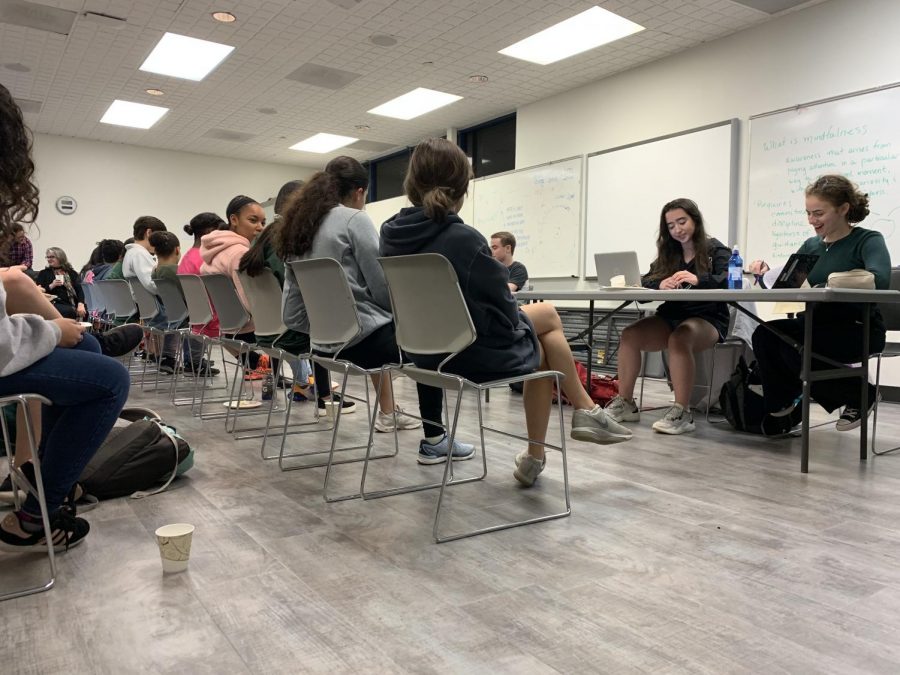 Students prepare for the debate. Photo by Sonia Dhingra.

On Thursday, Nov. 21 at 1:30 p.m., Project Dialogue hosted a student debate on gun control, free to all students and faculty who wished to watch and learn. Four panelists participated, with two on each team. One team, consisting of Sophomore Caroline Greenstone and Senior Alexandria King, was in favor of “the strictest gun control possible.” The other, consisting of Freshman Ian Bach and Senior Jack Berry, were in favor of maintaining gun rights and against gun control. Senior Josh Leffler facilitated the discussion. Both sides explained their positions, responded to other points made and asked questions to the opposing side.

The purpose of the debate was two-fold. The first was to help educate, especially since many of the attending students will be eligible to vote in this election or an election upcoming soon. Also, many people at the debate have influence in their communities and at home. The hope was that hearing from both sides of the issues would help everyone attending some nuanced ideas. The second was to show what disagreement looks like.

“Within these two teams we have very, very different viewpoints on a very important issue represented,” said Leffler. “Something we hope people will get out of the debate today is that there can be mutual respect between the two sides who disagree and that they can have greater understanding of where each side is coming from.”

The format of the debate was simple: a question was asked to each side and each side had two minutes to answer. Then the sides were able to ask each other questions.

Both sides agreed that in a perfect world, there would be no need for guns. Their views differed in terms of how to end gun violence.

“In an ideal scenario, gun control would be reduced from where it currently is so that people of a poor economic class have easier access to purchasing firearms for their self-defense,” said Berry. “Instead of focusing money and resources on taking away guns we could take away issues that cause gun violence, such as poverty and lack of opportunity… we would also like to focus on approaching mental health issues.”

“Taking away guns isn’t really going to help anything get done. More people are going to die if there are less guns out for people to defend themselves with,” said Bach.

“The question shouldn’t be how many people can get a gun in their hands but rather how many lives lost can we decrease, because right now when there’s 12,000 Americans dying from a homicide violence each year that’s caused by guns, this simply should not be the case,” said Greenstone. “We saw that when the UK outlawed guns, there are only 237 violent crimes happening each year as a result of other forms of violence.”

“While I do agree with upholding the values of the Constitution because they are our nation’s guidelines, I do feel that there is a way to enforce the strictest gun control in order to regulate the Second Amendment. All of our amendments have regulations and our court has upheld that time and time again,” said King.