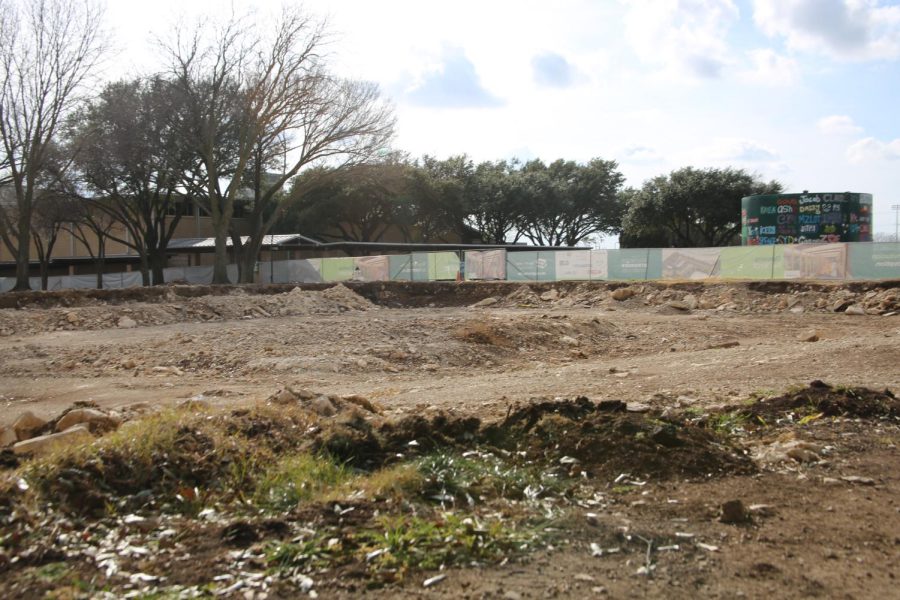 Capping years of anticipation and discussion, Head of School Lee Hark presided over groundbreaking ceremonies for a new campus STEM + Innovation Center on Feb. 1 on the site of the former Agnich Science Building.

The ceremonies marked the launch of Greenhill’s Growing Stronger Together Campaign, which Hark has described as “the most ambitious in the school’s history.” The campaign has already raised $44 million of a targeted $71 million aimed at enhancing school infrastructure as well as academic and athletic programs.

In his remarks before a gathering of school administrators, board members, faculty, donors and other guests, Hark shared plans for the STEM + Innovation Center as well as an indoor athletic practice facility, locker rooms and a new High Performance Center. The science, technology, engineering and math facility is scheduled to be complete in time for fall 2023 classes.

“A year and a half from today, we will look at this moment we spent together and remember its importance and its contribution to an even brighter future for our school,” Hark said in his remarks. “We are here to celebrate the launch of the Growing Stronger Together campaign, which will transform our campus with three major initiatives: of course, the STEM + Innovation Center,, expanded and enhanced athletic facilities, and endowment funding to support the operation of these new spaces.”

Marshall is the president and chief executive officer of Elevage Capital Management, an investment management company based in Dallas. Marshall and his daughter, Megan Marshall ’16, are both Greenhill alumni.

In his comments at the ceremony, de la Torre said that after moving to Dallas he was impressed with the achievements and message of Greenhill as a school. He said he is working to make Greenhill the best that it can be with projects like the new Innovation Center.

“It is going to revolutionize Greenhill,” de la Torre said of the Growing Stronger Together campaign. “Between the STEM + Innovation Center, the endowment growth and the new athletic facilities, I think this is going to be the best campus in all of the Dallas area.”

The STEM Center project will be led by Daniel Lee of the Pennsylvania-based architectural firm of Bohlin Cywinski Jackson.

“The existing buildings that you guys have on campus have such a rich history of good design, and we feel compelled and honored to contribute to that,” Lee said.

Head of Athletics and Physical Education Jarrett Shine was on hand to unveil his plans for the new state-of-the-art sports facilities.

“The facilities that will be constructed will provide a sense of pride for our athletes and offer space for our programs to grow,” Shine said. “The pride an athletic facility creates can have a positive impact on our athletes and the overall performance of a team.”