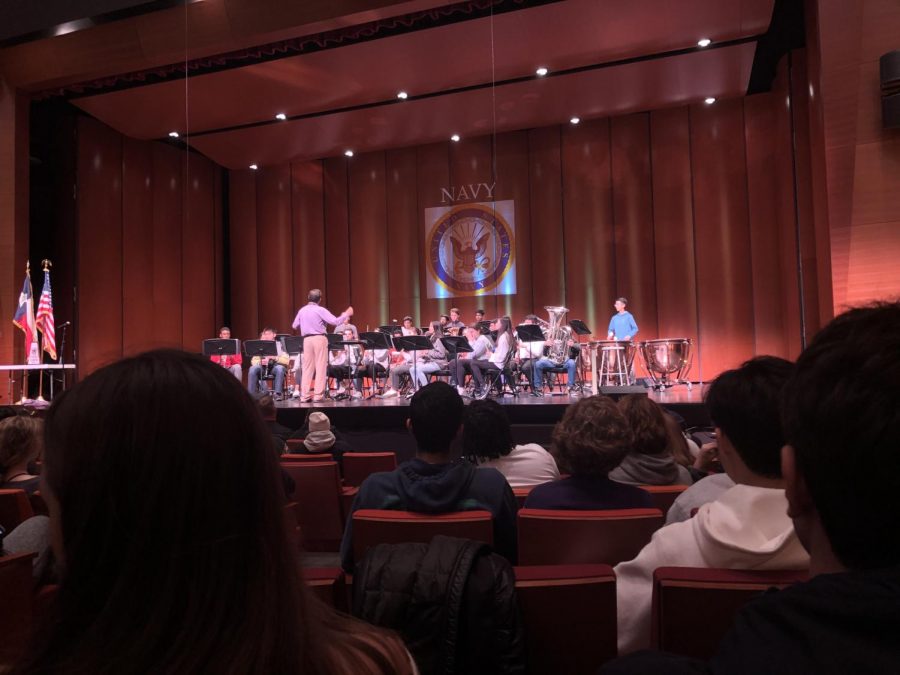 Greenhill celebrated Veterans Day on Monday with a special program during Community Time. The celebration started with the student body singing the “Star-Spangled Banner” and reciting the Pledge of Allegiance.

The songs were followed by the band playing a tribute to the veterans. Student Body President Jeffrey Harberg led a presentation honoring faculty veterans. A slideshow included pictures of many faculty members:

“Coach G” served in the Marine Corps. She is an integral part of the Greenhill community, working with athletes across sports in the HPC.

Lowen served in the Army. He is a history teacher here at Greenhill.

“Mr. P” served in the US Air Force/ National Guard right after high school. He did his U.S/ Air Force Basic Training at Lackland Air Force Base in San Antonio and then went to cooking school in Fort Lee Virginia.

Willis served in the Navy 12 years, starting in 1973 in Vietnam where he flew UH 1 “Huey” helicopters. He was in active combat just over nine months there. He later served in the Middle East, Iran and Africa. He’s been to both the North and South poles. He served with a special rescue unit that traveled around the world. One of his missions was the rescue of six nuns in Panama. These are just a few missions from his service. During his time he logged over 4,500 hours in flight time.

After, the security team at Greenhill, otherwise known as the “J Team”, had their own presentations. Each of them spoke about their experiences in the military.

Gonzalez served as a corporal in the United States Marine Corps from 2009-2014.

Donald served in the United States Marine Corps, rising to the rank of sergeant. He served as a Scout Sniper in Iraq and Afghanistan during the years 2001-2009.

After the presentation, Community Service Board member Josh Leffler gave an announcement encouraging people to come to write thank you cards for Greenhill veterans and the Dallas VA Medical Center.