The Evergreen Online • May 17, 2021 • https://evergreen.greenhill.org/gouru-21-receives-high-honors-in-band-for-french-horn/ 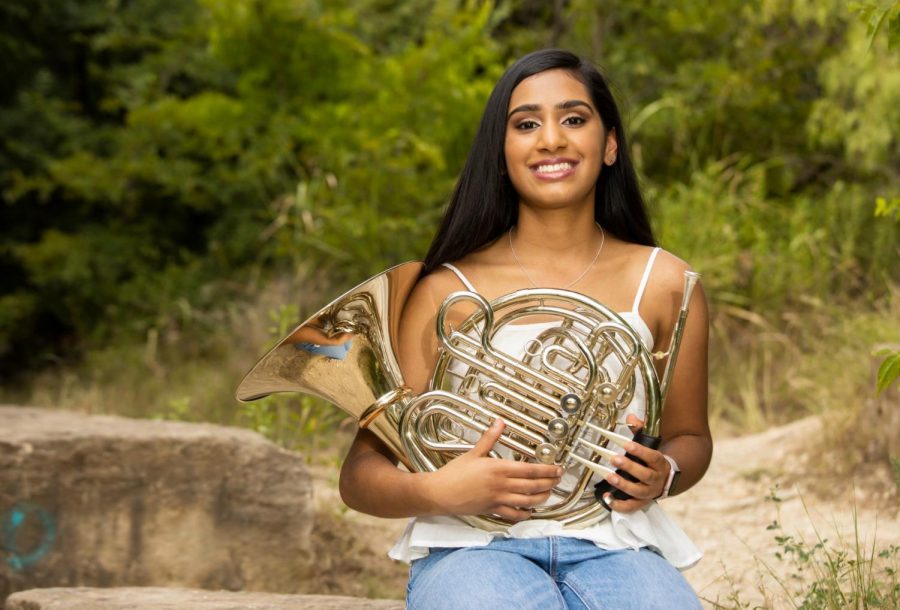 After years of practice and preparation, Greenhill senior Anagha Gouru was accepted into the National Honor Performance High School Band on the strength of her French horn skills.

Ever since she began taking band teacher Brian Donnell’s class in fifth grade, Gouru knew that it was something that she wanted to pursue at a higher level.  She had played the piano for several years before taking this class, but upon joining band, she became fascinated with playing music in larger groups.

“I really like the community in band that Mr. Donnell and all of the people I was with created,” Gouru said.

In fact, she liked the community so much in fifth grade that she decided to take band throughout the rest of her time at Greenhill.

She now takes Greenhill band classes on Gold days, in addition to one-hour private lessons she takes once a week.  These lessons help prepare her more for competitions outside of school.  Gouru practices very hard to perfect her craft as much as she can, and the work that she did to prepare for the National Honor Performance High School Band was no exception.

After getting an invitation to audition by making an all-state ensemble, Gouru got to work on the two pieces that she would present to the panel.  Last summer, she spent an hour or two almost every day doing serious practices.

“They only take like eight [French horn players], so I had to be very meticulous in my preparation and like strive for perfection,” she said.

Even though the date that she was supposed to figure out whether she got in continued to be postponed, her excitement didn’t waver when she found out she was accepted.

Gouru felt like all of the hard work that she put into her training had paid off, and she was very happy to see that other people were as pleased and as confident in her audition as she had been.

She is traveling to Austria on July 6 to practice and perform with the band.  In Austria, Gouru will practice for four days with the National Honor Performance High School Band and perform on the fifth and final day.

“I put a lot of work into my audition, and I felt really good about it,” Gouru said. “And I’m just really excited to play with a bunch of musicians.