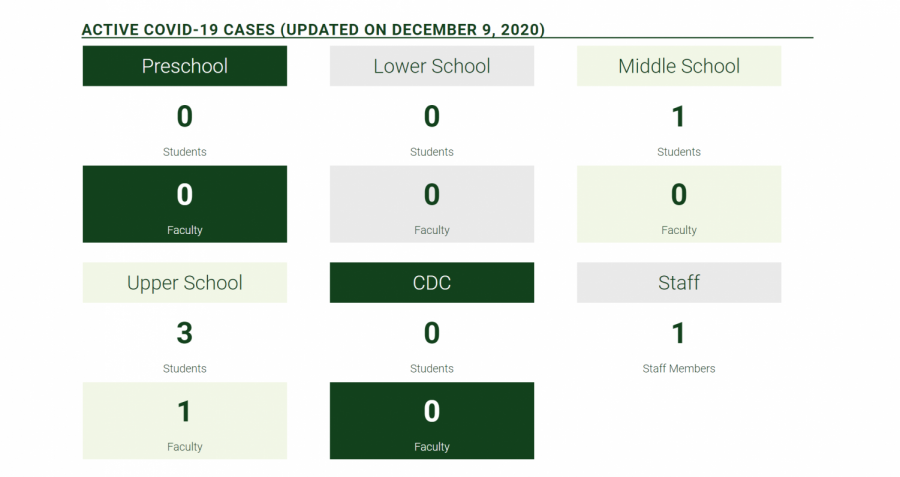 For Greenhill administration, managing the challenges presented by the COVID-19 pandemic has required more than enforcing classroom social distancing and other health precautions.

Communication with faculty, staff, families and students has been a critical element of the administration response, and that aspect of the pandemic has presented its own challenges.

One example: How should administrators inform the campus community of confirmed COVID-19 cases, and how often should that information be shared?

News of Greenhill’s decision to switch to a weekly summary came just after a series of positive cases.

“When I first heard the news, I didn’t fully appreciate the reasoning why,” said Megan Considine ’97, president-elect of the Parents Association.

After seeing how the decision played out, Considine says she is confident that Greenhill did the right thing.

The decision allows for more context to the cases, Considine says. By the end of the week, the administration might be able to define which cases were related and which were not, lowering anxieties of parents, she says.

At the same time, the Greenhill Dashboard, which shows active COVID-19 cases by division, is updated daily, providing an up-to-date source of information for parents who want it.

“I wouldn’t be sending my kids to school if I didn’t feel like [Greenhill was] doing as much as they could possibly do,” said Considine, who has sent her two students to in-person classes for nearly the whole year.

According to Head of School Lee Hark, the decision to switch to once-weekly emails was initially caused by a cluster of positive results, all stemming from one event.

Hark says that the quick turnaround for these positive tests created the illusion that the pandemic was spreading quickly at Greenhill. The restrictions imposed by confidentiality laws, meant to ensure student privacy, only exacerbated anxieties.

The Health Insurance Portability and Accountability Act (HIPAA) and the Family Educational Rights and Privacy Act (FERPA) are the two laws that limit the information the Greenhill administration is able to send to parents. They are allowed to name the division of the person in question, but no details such as their grade or advisory.

“It really comes down to trust,” said Hark. “If you’re a close contact [of someone who tests positive] you will be contacted.”

Director of Marketing and Communications Kerry Shea was involved in the decision-making process for the school’s COVID-19 communications strategy.

“One of the things that I love about Greenhill is that we can adapt and change over time,” said Shea, whose job revolves around communicating with families.

After hearing from a number of people, it became clear to her that Greenhill’s system for communicating positive tests needed change, she says.

Hark was also involved in the process. He says he knew the communications system needed change, but he was worried that some people would want an email after every positive case.

“You have to kind of figure out what is going to do the greatest good for the greatest number of people, and that was what tipped the scales,” said Hark.

Although Shea says she didn’t receive any complaints from parents, Hark confirms that some residents of the Greenhill community didn’t like the change to weekly emails.

Looking back at the decision, Hark says he thinks it is unlikely that they will turn back. Instead, the school will delegate decisions to division heads, who may send out additional emails if they feel it is necessary. For example, Head of Middle School Susan Palmer sent out an email to families recently when the Middle School saw at least five new COVID-19 cases.

A decision like the one to limit confirmation of positive COVID-19 tests to weekly emails would generally involve a variety of people including Hark, administrative personnel who hear from families, and Greenhill’s COVID response team, which is led by Director of Student Health Services Katie Trimmer, Shea says. It would take place on Zoom, or simply via email, depending on the decision.

One factor considered while making the decision was how other local private schools were communicating test results, Hark says.

Some schools send out emails after every positive test result and some communicate this information weekly; some don’t send any emails at all, but simply rely on their COVID dashboards.

For Hark, this issue is a metaphor for the everyday balancing act of communicating with Greenhill families.

”We don’t want to overwhelm our families,” said Hark. “At the same time, we want to make sure the members of our community know what’s going on.”