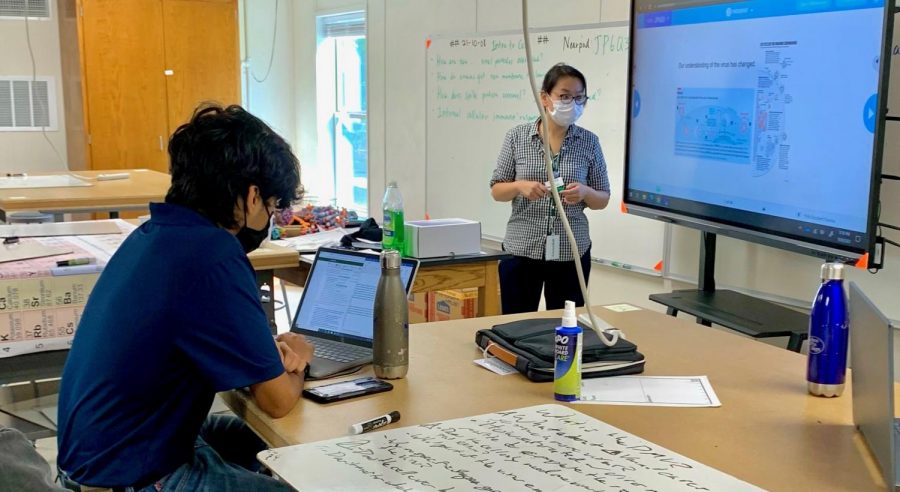 Sonia Chin, one of the newest additions to the Upper School Science Department, recalls looking at neurons under the microscope in her high school biology class and thinking they were the most beautiful cells she had ever seen. She says this fascinating experience was what piqued her interest in neurobiology and encouraged her to pursue it professionally.

Born and raised in the Dallas-Fort Worth area, Chin graduated from Plano Senior High School in 2005 and credits her high school AP Biology teacher as the person who sparked her interest in neuroscience and biology.

“There’s something amazing about being able to see things on a microscopic level and understand that what you’re studying is real and responsible for everything you’re experiencing,” she said.

From high school, Chin attended the University of Texas at Austin, where she received an undergraduate degree in biology, with a specialization in neurobiology. After graduating, she worked in the research department at the San Diego Zoo for a year and a half before deciding to pursue a doctorate in neuroscience.

In 2012, she began her doctoral studies in neuroscience at Johns Hopkins University. During her summers as a graduate student, she taught Baltimore public high school students how to do lab work. It was while teaching these students that Chin realized how much she enjoyed working with high school kids.

“You all [high school students] are at an age where you have really cool thoughts… you’re fascinated about the world [and] you’re discovering who you are,” Chin said.

In her own experience as a student, Chin says that as an Asian-American woman working in a STEM field she experienced a lot of sexism and racism during her training.

“It’s hard to be a woman of color in science,” Chin said. “That intersectionality and identity bring in certain negative experiences.”

She recalls several instances when men would speak over her and when people perpetuated cultural stereotypes of her as a Taiwanese American woman.

“People do recognize that women do belong in science, and they can do science,” Chin said. “But the behaviors haven’t shifted to help people [women] feel like they belong. And I think that [women belonging in science] will be a work in progress for a very, very long time.”

After graduating from Johns Hopkins University in 2016, Chin moved to Philadelphia where she taught at Friends’ Central School for four years.

She decided to move back to the Dallas area because of her parents, whom she hadn’t seen in 18 months due to the pandemic.

Chin thinks her unique scientific background allows her to give students in her biology and biochemistry classes a taste of what science is actually like because her classes focus on interactive learning through labs and reviewing research papers.

She says that she is very grateful that Greenhill has created a vibrant environment that allows teachers to experiment with different styles of teaching because it makes a better learning experience for the students.

“[Dr. Chin] is so cool and she brings a lot of her own experiences and research to our class,” Sherry Tang, a senior in Chin’s post-AP biochemistry class said. “I also like that we are able to ask a lot of questions, even if it may not directly relate to the topic.”

Chin is excited about her future at Greenhill and thinks it’s going to be an interesting experience teaching at the Science Village.

“I look forward to getting to know my colleagues and students a little better,” Chin said. “I also look forward to a time when we’re [teachers in the Science Village] are not quite as separated from the rest of the community.”