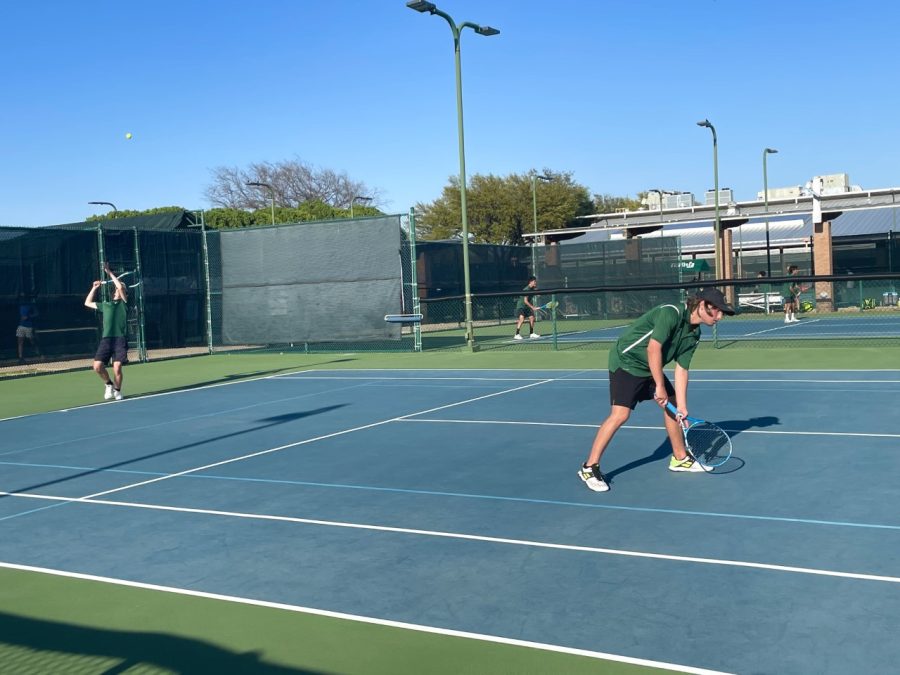 Most Greenhill students know Scott Cotton as a high school history teacher, but he has been Head Tennis Coach since 2016, winning two conference championships in this position.

Cotton grew up in Atlanta, Georgia, where he first started playing tennis with a friend at the age of nine. He quickly fell in love with the game and started playing in juniors’ tournaments.

“I was number one in Georgia for a couple of years and top 20 or 30 in the nation,” Cotton said. “I also went to Dunwoody High School where I was a two-time state champion.”

Playing tennis at Georgia Tech, Cotton was an ACC doubles champion twice in 1992 and 1994 and was named all-ACC in 1991 and 1992. With 76 total wins, Cotton is the third-winningest doubles player in Georgia Tech’s history.

“I just liked working with kids and being in a classroom with students, and I love the subject of history and government,” said Cotton.

Cotton eventually made the move to Greenhill.

“I was teaching at a public school nearby and liked it a lot, but I knew someone that was working [at Greenhill], and an opening came up,” Cotton said, [Greenhill] looked like a great school on the website, so I decided to apply and kind of fell in love with it.”

After coming to Greenhill as a history teacher in 2004, Cotton was also hired as an assistant tennis coach. Even as an assistant, he was a main contributor to the incredible run that tennis had from 2007-2017.

Following the 2015 season, former Head Coach Tim Barnard retired, leaving Cotton as the new head coach. In his first two years as head coach, the team won back-to-back championships in 2016 and 2017. The team has not won SPC since.

“A couple of schools have just had really great players, so sometimes, other teams are just a little stronger, but we are on the way back,” said Cotton.

In the Phillips Gymnasium, every sport offered at Greenhill has a banner that displays the years that the team has won the Southwest Preparatory Conference (SPC) championship. While Boys Soccer and Boys Volleyball have taken home 15 championships each, there is one sport that has too many championships to fit on the banner: Boys Tennis.

Once a powerhouse in SPC, winning nine championships from 2007-2017, the Greenhill boys’ tennis team hasn’t reached that success in the past five years.

Like his father, Cotton’s son is also reaching success in tennis. Seventh-grader Wesley Cotton is currently the 16th ranked player in the country and the number one player in Texas in the class of 2027 according to the Tennis Recruiting Network.

“I’m very proud,” Scott Cotton said. “He works super hard and I’m proud of his results, but I’m even more proud that he works hard, gets up early in the morning and tries his best.”

Led by senior Josh Rubel as well as freshman Tal Rogozinski and sophomore Safin Stefanos, the Greenhill boys’ tennis team is currently off to a great start this season with a record of 3-0. While winning the SPC is the goal this season, Scott Cotton doesn’t use wins as his only measure of success.

“Our effort and attitude are phenomenal, so I wouldn’t just base our success necessarily on results,” Cotton said. “The kids we have had on our team the past couple of years have been amazing and easy to work with, so we don’t just use SPC championships as our only metric.”

Rogozinski and Stefanos are both nationally ranked, and Wesley Cotton will enter high school in a couple of years. It is safe to say that the future of Scott Cotton’s tennis program is bright.