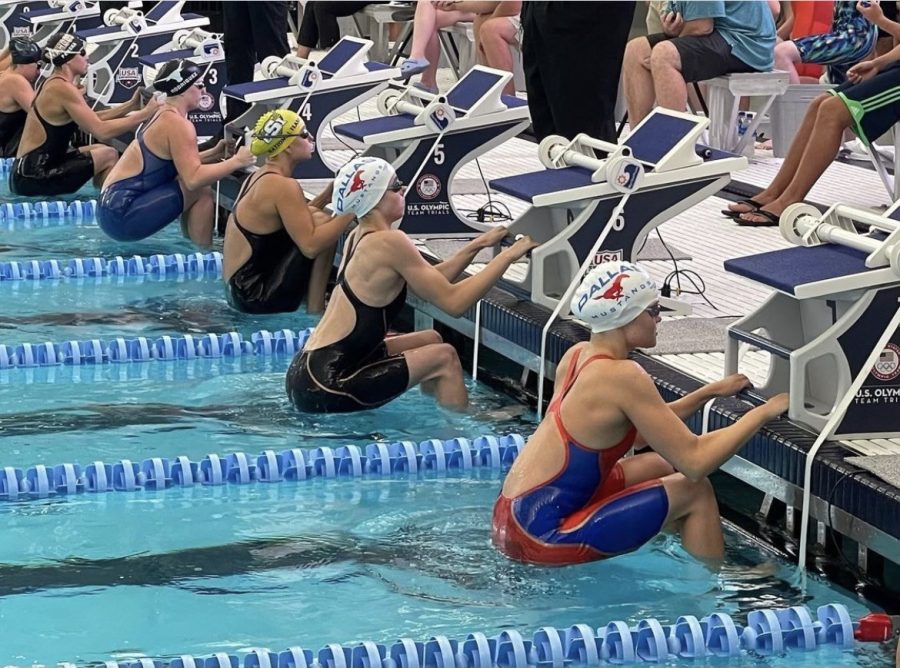 Sophomore Josie Arbuckle is an athlete that has a passion for her sport and has many accomplishments only two years into her high school swimming career.

“Swimming acts as an outlet for me,” Arbuckle said. “It lets me clear my head and stay in shape while spending time with some of my favorite people.”

Arbuckle has always taken swimming seriously but in seventh grade, the level of intensity turned up. With her end goal being to swim in college, Arbuckle dedicates numerous hours of training per week. She follows a training regimen of 15 hours a week in the pool, four hours of weight training, two hours of mental exercises and visualization, and one hour of stretching.

On top of schoolwork and other activities, Arbuckle attends club practices and meets seven days a week and goes to practice twice a week for school during the swim season.

Head Swim Coach Patti Monzingo helps to facilitate Josie’s busy schedule by only requiring her to practice at Greenhill twice a week. By doing this, Josie won’t get overworked by multiple practices a day.

She says she wants to help Josie pursue her passion, “Josie has that drive, and it’s very exciting to watch her swim,” said Monzingo who has built a good relationship with Arbuckle over the past two seasons.

Josie has led the team in multiple meets, naturally assuming her position as a leader on the team. However, she recognizes that her absence during practices sets her apart in aspects of team connections.

Arbuckle said, “If I put myself in their shoes, I would probably wish that someone would come [to practice] more.”

This hasn’t stopped her from gaining recognition and admiration on the team. When asked about Arbuckle’s contribution to the team, teammate Sarah Fradkin ’24 points to her willingness to swim whichever event would put the team in the best position to win.

Throughout the season Arbuckle has consistently led the team. She has placed first in many meets contributing to the team’s successes.

“I really don’t see anything holding her back and she is really coming forward as a leader on the team,” said Monzingo. “She had an eye on the prize and wants the team to have that drive.”