Fall Production: From “The Exonerated” to “Race, Fire, Children and Wives”

Fall Production Writes and Films a Play during COVID-19 Restrictions 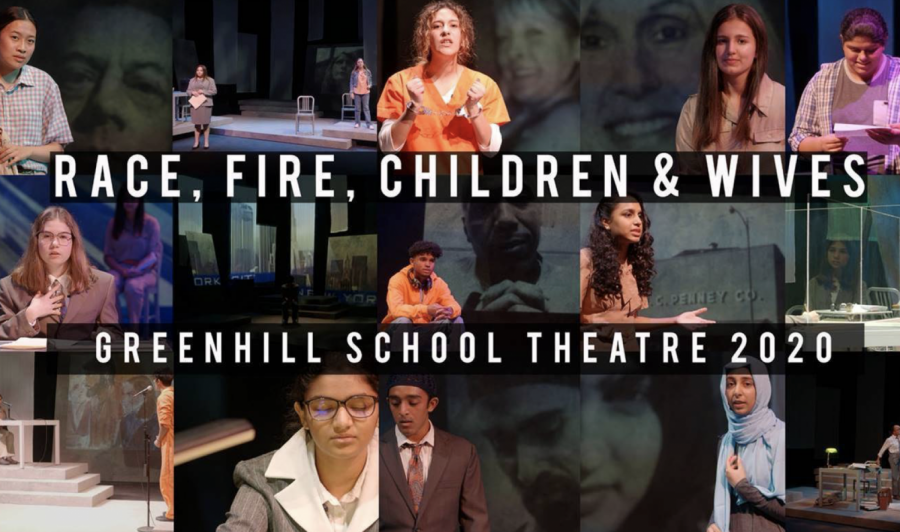 With the combination of hybrid learning and social distancing from other students, theater teacher Valerie Hauss-Smith and her colleagues worked hard since the end of the last school year to plan their fall production.

The team ended up writing their own play called “Race, Fire, Children & Wives.” They filmed it and shared last Thursday, Friday and Saturday it through Zoom.

This year has been unlike any other for the fall production due to the inability to perform on a stage together with an audience. Hauss-Smith had planned to produce a musical in the fall and a play in the spring, however that proved to not be a possibility. The class is still called the Fall Musical Production even though they are producing a play and not a musical.

“We realized that singing is one of the most dangerous activities when COVID is around, so we decided to switch the play and the musical so that it would be safer,” said Hauss-Smith.

Not being able to produce a musical during the fall was not the only obstacle that the fall production ran into. At the end of June and the beginning of July, they purchased the copy rights to a play called “The Exonerated,” thinking that situation with COVID-19 would improve and they would be able to put on an in-person production.

“Since July, we had to start thinking and shifting and trying to talk about digital rights because who knew what was going to happen with COVID,” said Hauss-Smith.

The reason why the fall production class chose “The Exonerated” is because it is relevant to the spark of racial injustices that occurred during the summer. “The Exonerated” is a piece that highlights the real stories of people who have been wrongfully convicted and then proven innocent after jail time.

“When all the things started happening in the spring and the summer in America, we found ourselves looking at plays and saying that there was no way we can do a fluff, happy piece,” said Hauss- Smith. “It is a really powerful piece that talks about the line between and innocent and guilt being very thin and how it requires everyone from the justice system doing their job well, which doesn’t always end up happening.”

Hauss-Smith knew that she would need to purchase digital rights and that the play that they had planned would become a film. After contacting various people for the digital rights, she found it difficult to get a response and the situation was more complicated than they thought.

“We tried all sorts of ways after getting an initial no. We tried to communicate with the playwrights directly and we got word that they no longer owned the rights to the play and that they had been sold to Court TV,” said Hauss- Smith.

Not having the digital rights meant that they were not going to be able to record the play. The Fall Production class still wanted to stick to the theme of social injustice so as a solution, so they decided to write their own play which they called “Race, Fire, Children and Wives”.

“The students researched real cases and we have been in touch with the Texas Innocence Project.” said Hauss- Smith.

The play many monologues, making it easier to film the production safely. They have also brought in a professional playwright to help put everything together.

The students made many preparations to help make their play as authentic as possible. They coordinated with the Texas Innocence Project and spoke with social justice activists.

“The lady that we are speaking with at the Texas Innocence Project herself, at 19, was wrongly accused and spent twenty years in jail,” said Hauss- Smith.

Senior Samantha Norton did not expect her last year in the Fall Production to be so complicated. Nevertheless, many students have enjoyed the opportunity to write their own play.

“It was really exciting when I first found out because it is something that I have never done before,” said Norton. “I have loved finding the person that I connect to the most. I have been doing research on Audrey Edmunds who was put in prison after people thought that she killed a child that she was babysitting. It was later proved with scientific evidence that the child suffered a mental injury after being in jail for 11 years with a 19-year sentence.”

After working with the Texas Innocence Project, students began worked on writing their own monologues and crafting an original script.

“Everyone wrote their own parts and I wrote my whole monologue,” said Norton. “I found it easier to perform and memorize something I wrote because it was my writing and ideas.”

The cast filmed the entire play which was then edited together to show to viewers. Students worked to film their different parts, all while prioritizing safety. Students filmed both at home and at school. When filming on stage students kept at least 12 feet of distance at all times to prioritizing health and safety.

“Because of COVID-19 we really had to challenge ourselves to work both at home and at school to film,” said Norton. “It was a real challenge but it was also a great experience and while it was hard to adjust, in the end I am really happy with what we came up with.”

Hauss-Smith has been very happy with the students and her colleagues’ adaptability during this transition phase. The whole experience has been new and difficult to everyone, especially with hybrid learning and not having all participants physically present.

“This has forced us as teachers and artists to rethink how we teach and how to find ways to engage everyone. What I like about it is that it really is a different type of challenge. It is a process and we do not have all the answers so it’s kind of like solving a mystery,” said Hauss- Smith.